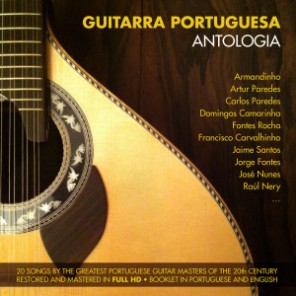 Guitarra Portuguesa Antologia is the most representative work up to date that features most of the great performers of this instrument, in particular the generations that stood out during the 20th century.

In this work it is quite clear the performing mastery with which these biggest names become synonymous of the instrument itself, being an inspiration for all the generations to come.

The first part of this record is dedicated to Lisbon while the second is dedicated to Coimbra, exemplifying the different schools and way of playing, as well as the distinctive repertoire that is mostly divided between these two cities.

It is true that the Portuguese guitar is intrinsically related to fado, however, it is a concert soloist instrument that can perform a wide range of repertoire

beyond fado, with a great potential due to its unique sound. A good example is Carlos Paredes who created a self repertoire for this instrument based mostly in the Coimbra’s school, son of Artur Paredes that had a great relevance in the conception of the Coimbra guitar in close collaboration with the Grácio’s luthiers family. Guitarists such as António Portugal or Jorge Tuna are also major references in the guitar of Coimbra.

The Lisbon’s language is closest to fado, many of the variations are based in fados in major or minor tones, often with improvised melodies and sometimes doing the melody of the voice - what happens frequently in rhapsodies. Armandinho, Jaime Santos, Francisco Carvalhinho, Fontes Rocha, José Nunes or Raúl Nery are essential names of the Lisbon’s school, some of whom have had their own ensembles of guitars and others have integrated well known trios, quartets and quintets.

It is important to mention the same mastery in the fado guitar or classical guitar accompaniment, Martinho d’Assunção is a great example that in addition to play with many of these masters accompanied as well most of the greatest voices of fado of his time. Joel Pina who was his student, he is the major identity in the bass guitar accompaniment.

In what concerns Coimbra - Fenando Alvim was the greatest partner of Carlos Paredes at the fado guitar, he was the one who could guess and follow what Paredes was going to do next.